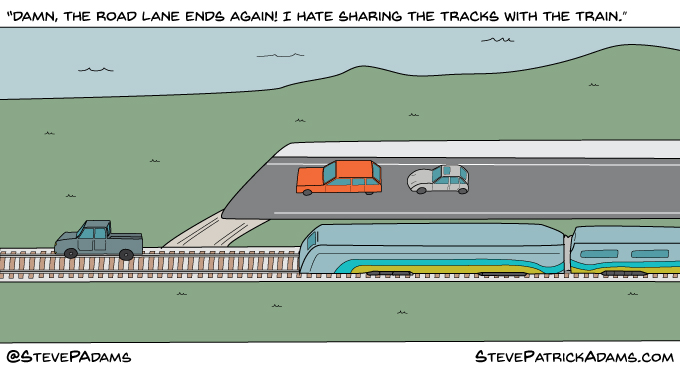 TODAY: Please send a short email to our mayor, council & staff in support of bike lanes along the FULL segment on Tilly Mill Road between North Peachtree and Womack. Share this message on Facebook, Twitter and email your friends. 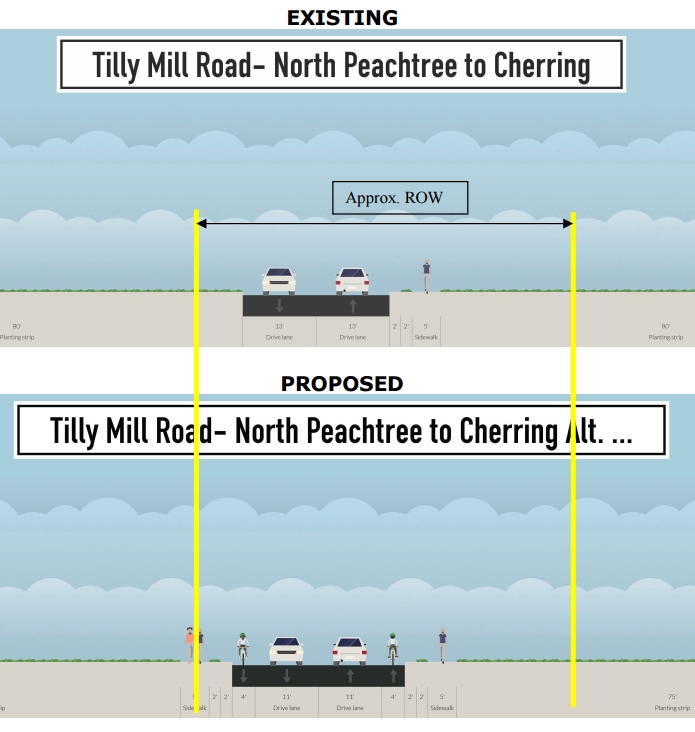 The not so good:

From Cherring to Womack, there is proposed wide, 13-ft motor vehicle travel lanes with painted “Sharrow” markings on the pavement. 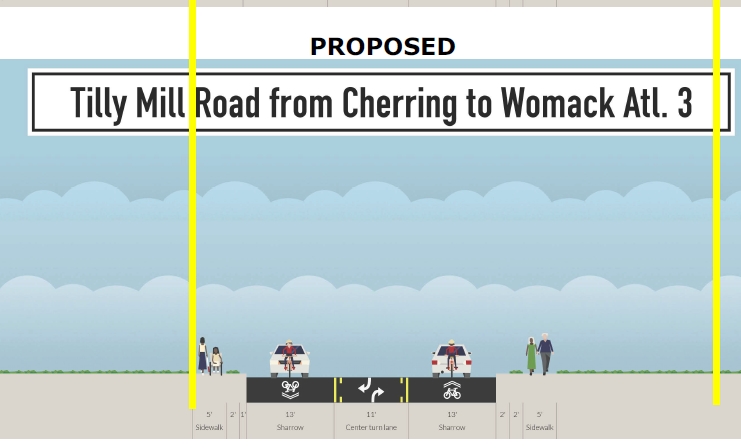 Our ask: Bike Lanes along the FULL segment from North Peachtree to Womack.

Why? Safety & Traffic calming. We believe that public safety should be the number one criteria for the designs of our streets.

13-ft travel lanes will cause motor vehicles to speed faster through this residential corridor en route to destinations such as Georgia Perimeter College. Narrow the travel lanes to 10-ft, like they are on Dunwoody Club Drive. Narrower lanes will help traffic calming. Slow down speeders and make it safer for the residents that live on Tilly Mill to simply get out of their driveway easier & safer. And you’ll only need another two feet to get 4-ft bike lanes. Adding bike lanes provides an additional safety buffer between pedestrians walking on the sidewalk and motor vehicles, too.

Sharrow markings are NOT a bicycle facility. They offer no separation between metal boxes on four wheels and persons on bicycle. They will not encourage the 10-year olds or Peachtree Middle School children to ride in the middle of the street “sharing the road” with cars & trucks.

Over 280 active persons have endorsed Dunwoody’s Complete Streets Policy, which recognizes that transportation projects involve safely moving PEOPLE, which include sidewalks and bike lanes; and not just strictly roads for motor vehicles. . If you haven’t yet, please sign the on-line petition, click HERE.

Scroll down for more supporting reasons.

Those who show up, get counted! Attend the City Council meeting on Monday 12/14 & be heard

UPDATE #2: Video of Dunwoody Citizens in Support of Bike Lanes on Tilly Mill from June 8, 2015

Here’s a video extract from the City of Dunwoody Council meeting on June 8th, 2015 of Public Comments regarding bike lanes and safe places for persons to ride. 9 people spoke in support and 1 against (The opponent lives on Tilly Mill).

UPDATE #1: Sound Your Voice for Bikes on June 8th

It is expected that the City Council will have a second discussion of this project on Monday, June 8th. If you can make it, please come to the meeting, sign up for Public Comments and voice your support. come to City Hall by 5:45 pm and sign up for Public Comments and Sound Your Voice for Bikes. You’ll get three minutes to speak to Mayor Davis and our Council members on why you think this is important. Before the meeting starts at 6:00 pm, be sure to fill out a Public Comment card & hand it to the City Clerk before the meeting starts.

Video of City Council Discussion from May 26th

This is a great video to understand the process of how our Dunwoody City Council decides where a new bike lane may — or may not — get installed. It’s conversational and is about 25 minutes long. Starts with a brief explanation by a Public Works staff member and then the Council takes it from there. At the end, you’ll hear City Manager, Eric Linton close with the takeaway that he’ll work with staff, re-work a proposal and present to the council at the next session, which is scheduled for June 8, 2015.

On Tuesday, May 26th, the Dunwoody City Council will be hearing from our Public Works staff on a proposal to add new sidewalks and bike lanes along Tilly Mill between Womack & North Peachtree. The staff proposal is to have bike lanes from North Peachtree to Cherring Lane, which will be absolutely terrific! For those of you that have ridden on this segment, you fully understand how uncomfortable and uninviting this part of the road can be. However, the bike lane stops well short of Womack by 1/3 of a mile and requires persons traveling on bicycle to merge into the motor vehicle lane. Most persons are not comfortable riding a bicycle with heavy traffic in the same space as a 4,000 pound metal box on wheels. Instead, we’d like to see bike lanes along the full segment.

Does this look comfortable to you? 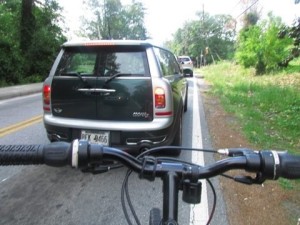 Photo along Tilly Mill from the perspective of a person on a bicycle. 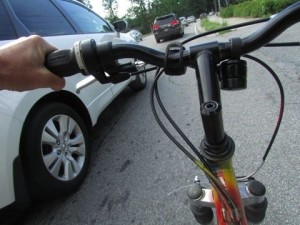 Perhaps one of these might be more appealing to you or your child?

Each alternative includes new 5-ft sidewalks along the west side of Tilly Mill.

Staff is proposing Alternative 3, which has the bike lanes ending near Cherring Lane, instead of going the full distance to Womack.

Download the staff memo with their proposals here: 05262015_TillyMill_Sidewalk_Concepts

For SAFETY, each alternative needs to include minimal 4-ft wide bike lanes to create a connected segment. 5 feet wide bike lanes are preferred. Reducing the motor vehicle lane width to 10-ft (As proposed both for this very same segment in 2010 by our Public Works and on Chamblee-Dunwoody with the Georgetown Gateway project) will provide 5-ft wide bike lanes.

For LAST-MILE non-motorized CONNECTIVITY to important destinations, bike lanes need to be along the full segment. Within a half a mile of this street are high-demand destinations including the Dunwoody Campus of Georgia Perimeter College, Marcus Jewish Community Center, Brook Run Park and Peachtree Charter Middle School. Providing full Complete Streets facilities including bike lanes will offer a much safer alternative for nearby residents that may want to use their bicycle for these short trips.

The alternatives as proposed by staff include:

* In 2010, Public Works staff conducted a preliminary study and presented to Council to remove the center turn lane between Womack & near Cherring Lane. See their proposal attached below.

Bike Walk Dunwoody would like to offer the additional alternative 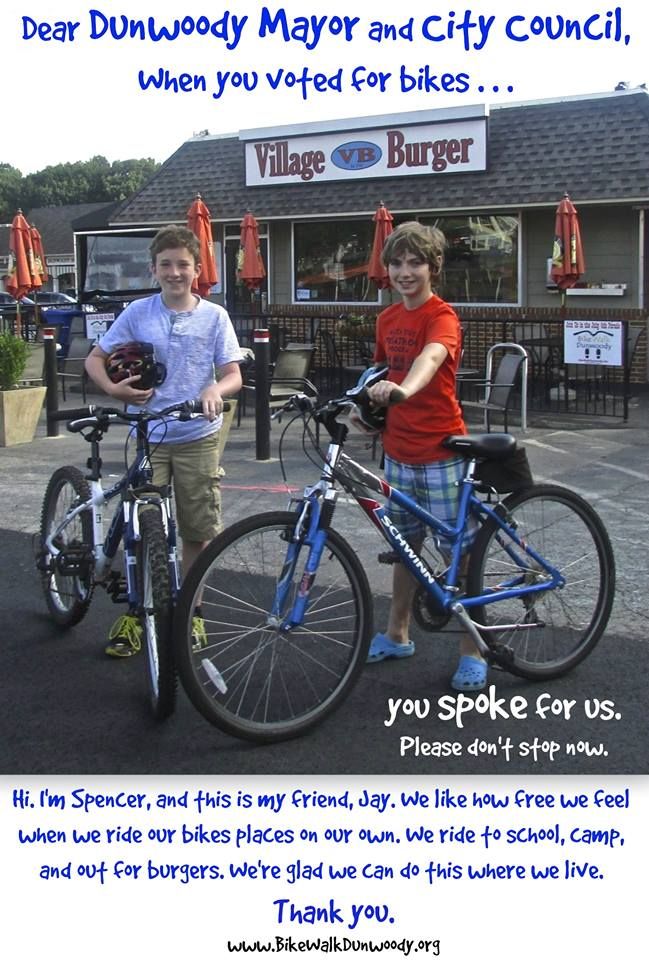 People like Spencer and Jay are looking for safe places to ride their bikes.

a. The center turn lane was installed after the tornado by DeKalb County. It was not part of a mater transportation plan, nor thought out how it would be integrated with the adjoining street network.

b. If logic says a center turn lane is required and necessary for this segment of Tilly Mill, then the same holds true for Mount Vernon and Chamblee-Dunwoody.

c. How many homeowners along Mount Vernon and Chamblee-Dunwoody have come forward professing a requirement to install suicide center turn lanes in front of their homes? There is a known citywide preference to NOT have center turn lanes along the full lengths of these streets.